Focusing on the fact that Japanese taxi company needed large-scale investment in their traditional dispatch system which requires business radio for each operator, we decided to invent a system called SMART which could largely reduce cost and simplify implementation by using smartphone/tablet as onboard device and its mobile network and by using cloud service on the center side.

Our system, SMART, contributes to dispatch task efficiency through realization of the same function as AVM system by coordinating with other cloud system such as CTI, residential map and speech synthesizer. It’s already been implemented to Fuji Taxi Group in Nagoya and NISIKI Taxi in Hiroshima, and we expect to provide it widely, mainly to local taxi companies. In 2014, we have received the MCPC Ward Excellent Product Award for developing a superior mobile solution.

SMART’s system acquires information such as meter status from existing in-vehicle hardware on real-time basis through Bluetooth, and it also realized dynamic management/dispatch automatic matching on IP basis. It can also work with car navigation applications so that only 1 smartphone could have all the functions required to AVM system: meter coordination, dynamic management, dispatch matching and navigation. 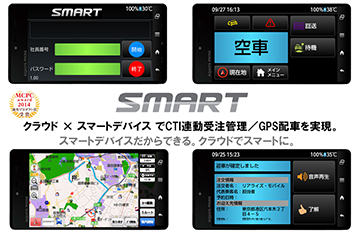 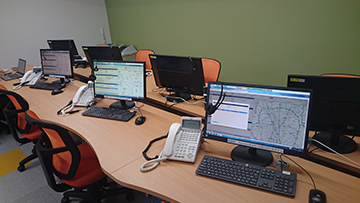